From fundamental studies in physics, material science and biology, to applications in engineering, the “interface” between two continuous phases includes complex molecular and particulate structures. The mechanical, chemical, thermal and transport properties of such compound interfaces are crucial to the macroscopic response of many systems. Therefore, controlling and optimizing various interfacial transport phenomena remains a canonical problem with strong intellectual interest and broad industrial impacts. We are harnessing various interfacial transport dynamics in complex fluids, as a synergetic strategy to manipulate the physical and chemical properties for engineering soft materials. Currently, we focus on three key areas in our work:

Bubble dynamics with a compound interface

Bubbles are widely observed everywhere, as they are easily formed by natural and industrial processes, such as wave breaking and raindrop impacts. Bubble dynamics play a key role in mediating the mass transport across the interface in a wide range of physical, geological, and biological phenomena. Recently, bubbles have been recognized as a major public health concern, in particular regarding the aerosolization of contaminated water for airborne transmission of infectious diseases, such as the coronavirus disease 2019. In essence, rising bubbles scavenge surface active organic materials, such as virus and bacteria, from the water column at their interfaces, and this process facilitates the formation of the organic-enriched liquid–air interface. Examples include the sea surface microlayer on the ocean, or the microorganism-enriched interface in the reaction tanks of municipal waste water treatment plants. Then these surface bubbles eventually burst once the liquid film that forms the bubble cap drains to rupture, generating film droplets by cap disintegration, as well as jet droplets by fragmentation of the upwardly directed liquid jet formed at the end of cavity collapse. Our lab is focusing on studying the interplay between bubbles and a contaminated interface, as a crucial factor to the aerosol droplet generation, with experiments and modeling.

Giant unilamellar vesicles (GUVs) are commonly employed as a simple representative system to study biological cell behaviors. In addition, with the development of biological techniques and use of bottom-up approaches, GUVs also serve as fundamental building blocks to construct a cell-mimicking system. Therefore, GUVs are considered as an excellent tool for enhancing a fundamental understanding of lipid membranes and artificial cells ranging from phase separation and lipid domain emergence to physiological response of cells to their extracellular environment. In these contexts, the mechanical response of vesicles plays a key role in predicting shape transformation of cells, illuminating the origins of life, and determining the content release dynamics in targeted nanotherapeutics; leaving vesicle stability in non-equilibrium environments an indispensable aspect of the dynamics. In particular, osmoregulatory has a significant effect on vesicle stability, sometimes leading to drastic outcomes such as fusion and fission of cells and liposomes. On the other hand, artificial systems have recently been developed to leverage osmotically induced lysing in applications such as vesicle based delivery of nutrients, biological actives, and pharmaceuticals. Our lab aims to understand the lipid membrane dynamics under osmosis-induced stress and further harness the osmosis flow for vesicle delivery and content release in biomedical engineering, with the development of a microfluidic platform and a general biophysical model.

Polymer self-assembly for delivery and diagnostic

With significant attention focused on nanoscience in recent years, nanomaterial-based drug delivery has been propelled to the forefront by researchers from both academia and industry. However, a lot of new developed therapeutics for diseases cannot be moved into clinical trials since the new compounds are highly hydrophobic and difficult to dose. Using the Bubble Bursting and Flash Nanoprecipitation Platforms based on rapid mixing and polymer self-assembly, our lab is developing a versatile, low-cost and scalable protocol to prepare difficult-to-deliver therapeutics into polymeric nanomedicines. Our lab is working closely with people from pharmaceutical chemistry for various therapies and bioimaging agents, which are difficult to delivery in traditional formulations. In addition, with microfluidics, our lab is capable of generating composite microparticles encapsulating nanoparticles with polymer scaffolds to provide an additional barrier for sustained release. Our lab is also interested in studying how the drug-loaded polymeric nanoparticles transport through the human body. The wide compatibility for various materials and the multimodal imaging properties of the nanoparticles by our platforms will enable us to better observe the dynamics for optimum characteristics for enhanced delivery. 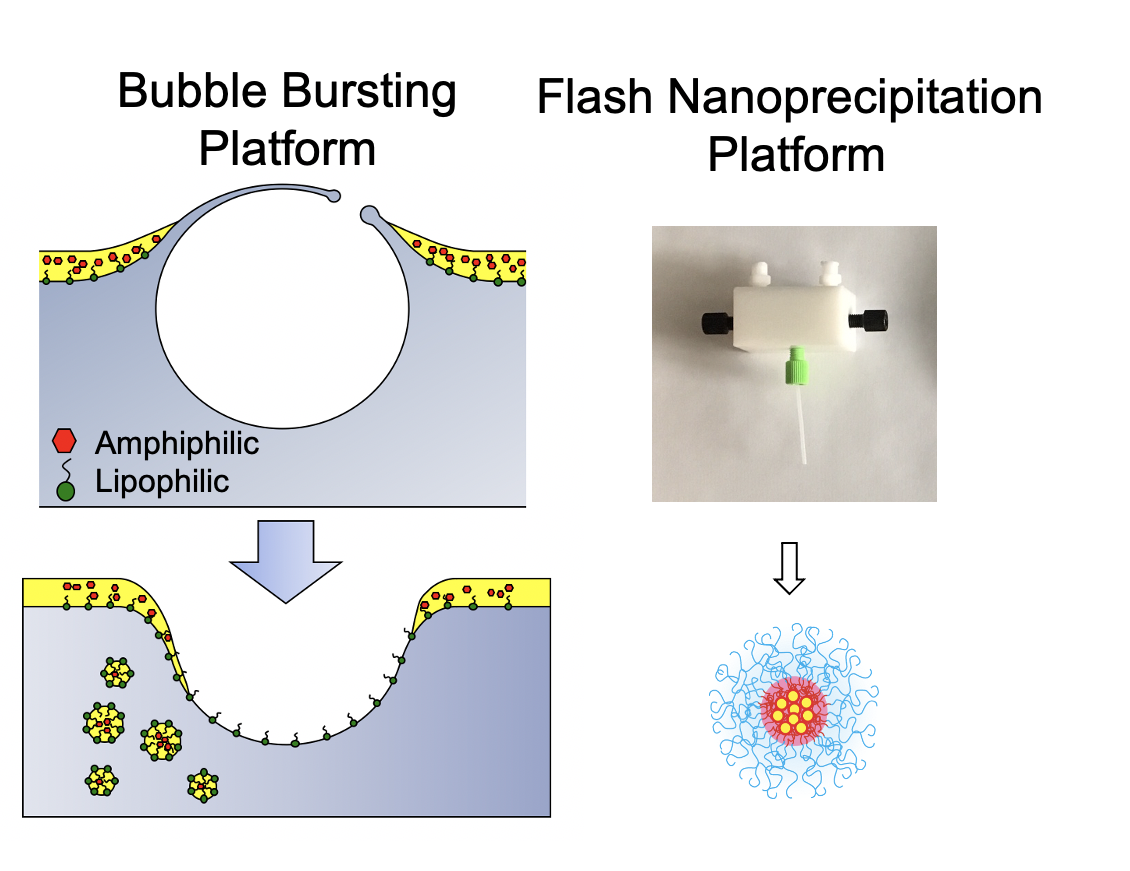 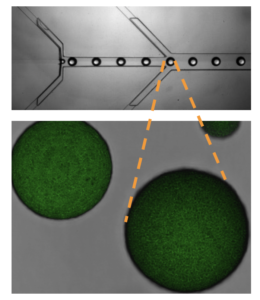 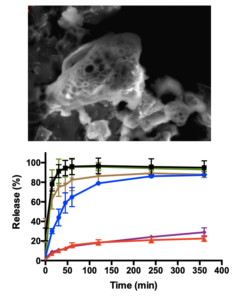